I thought I would post an update about my new sisters. The latest pictures are from when they are a month old, they are more like 6 weeks old right now. We will have to take updated pictures and maybe even a video!

Well, they graduated out of their box, and now they live in birdcages. I will do another post on that. First their names were April, May, & June. Then we got additional input from friends, and they are called April, Apple, & Amelia, and the months are now their middle names.

April: April is an "Easter Egger" type of chicken, or what I'd call a chicken mutt. They don't have a specific breed. But they are popular because of the color eggs they lay; we were told that April could lay blue, green, or rose colored eggs! We will have to find out in about 6 months. April is definitely an alpha kind of gal. She likes to be boss. She is pretty wild and adventurous. As she gets older though, she starts to get a little flighty, and not as relaxed as the other two.

Apple June: She goes by "Apple." She is the largest of the bunch! At first she was a little flighty and not as trusting and easy to handle. But as time has gone by, she is growing up to be more and more calm, which we like a lot. She is a nice gal. She is a "Welsummers" breed of chicken, and will grow up to be a lovely brown chicken. A fun fact: Cornelius, the chicken on the box of Kellogg's Cornflakes, is a handsome Welsummers rooster. Welsummers hens lay dark chocolate brown eggs. However, sometimes they turn out lighter, so we will see. Also, sometimes the eggs are speckled! I sure hope so!

Amelia May: Amelia is the runt of the group, the smallest from day one. However, she has been catching up in size to the other two, which is good. She is also a Welsummers chicken and should also lay a dark brown egg. My Auntie M handled her a lot when she was a baby, so she has always been the calmest and friendliest and seems to like interactions with humans the most. She is very cute. I let her stand on me sometimes.

Chickens continue to be amooousing. However, as they have grown up, they are getting flappier and that scares me a bit sometimes. I don't know what I think sometimes. Sometimes I retreat to the back of the house when they are being too obnoxious and flappy.

Well, that is the update here. I am training for my Agility Trial this weekend, and will let you know how that goes!

You might be wondrin' why I got this bandana on my head... 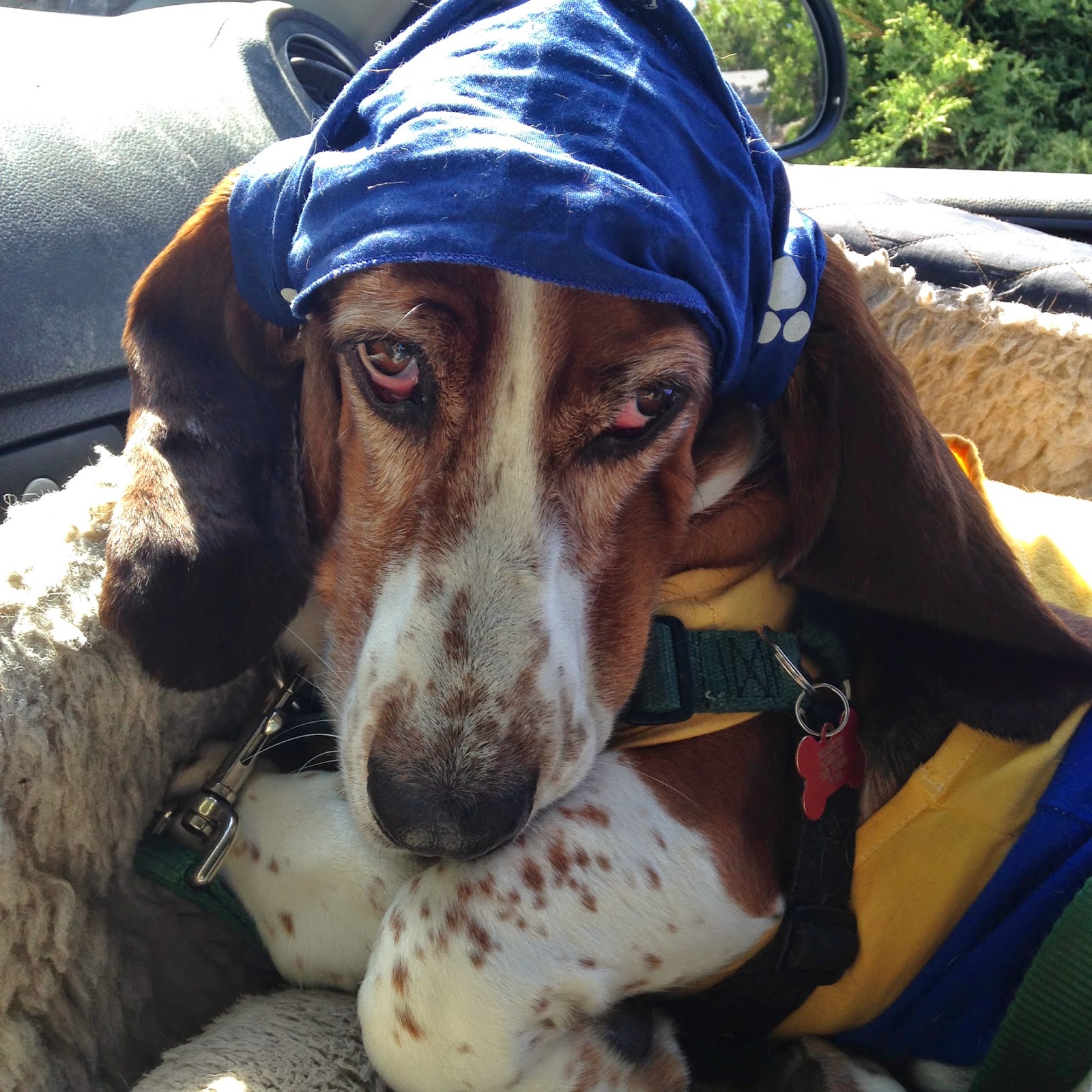 Well, 6 months ago, I got this flat round disk growing on my forehead. It wuz fine.

Then all of a sudden, it grew and grew.

I wuz starting to look like I wuz growing an alien on my head : ( 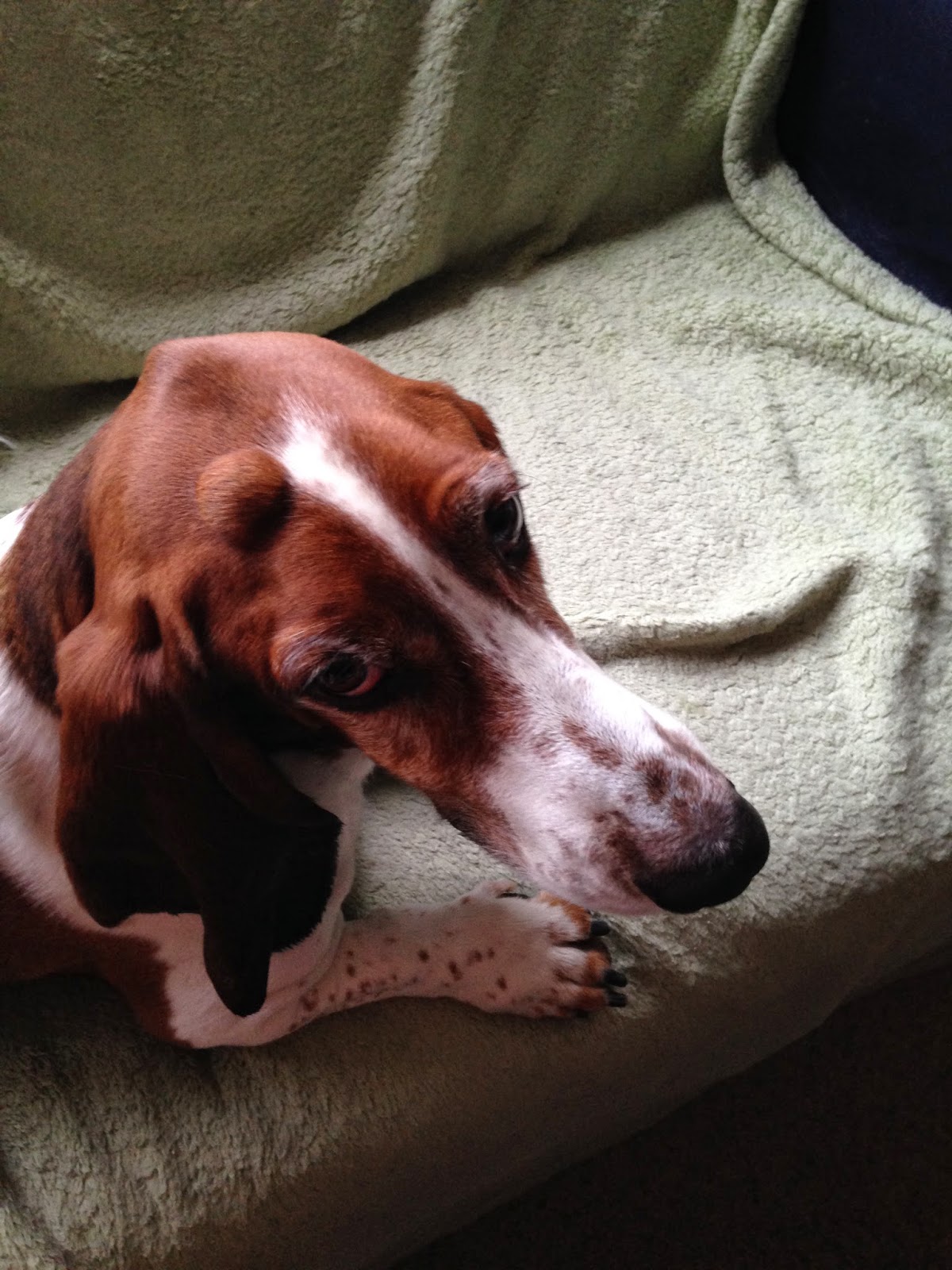 Plus, peeples were stopping to tell my person that me has a lump on my head.

Two weeks ago, we went to the vets. It wuz my Dr. B. They gives me funny medicines which makes me pukes and then sleeps. I had 3 different cysts: on my forehead, my lower back, and my neck. I went under general anesthesia and they all came out.


Afterwards, I tried to wake up fast but wuz woozy. I tried to stand but couldn't. Finally my front arms were working, while my back legs were not for 10 minutes. It wuz weird.

My person says I wuz needy after my surgeree. I wanted endless pats from my Auntie M. Well I think I might deserve it, after my head AND neck AND back hurts so much.

I scratched my stitches out twice and scarrrrred my person into bringing me back to the vet twice. Ultimately, two of my stitches had to be reglued. Revenge is sweet.

Anyway, my person makes me wear bandanas and hats to protect my stitches from the sun. Me don't likes it at all & tries to remove these silly things. 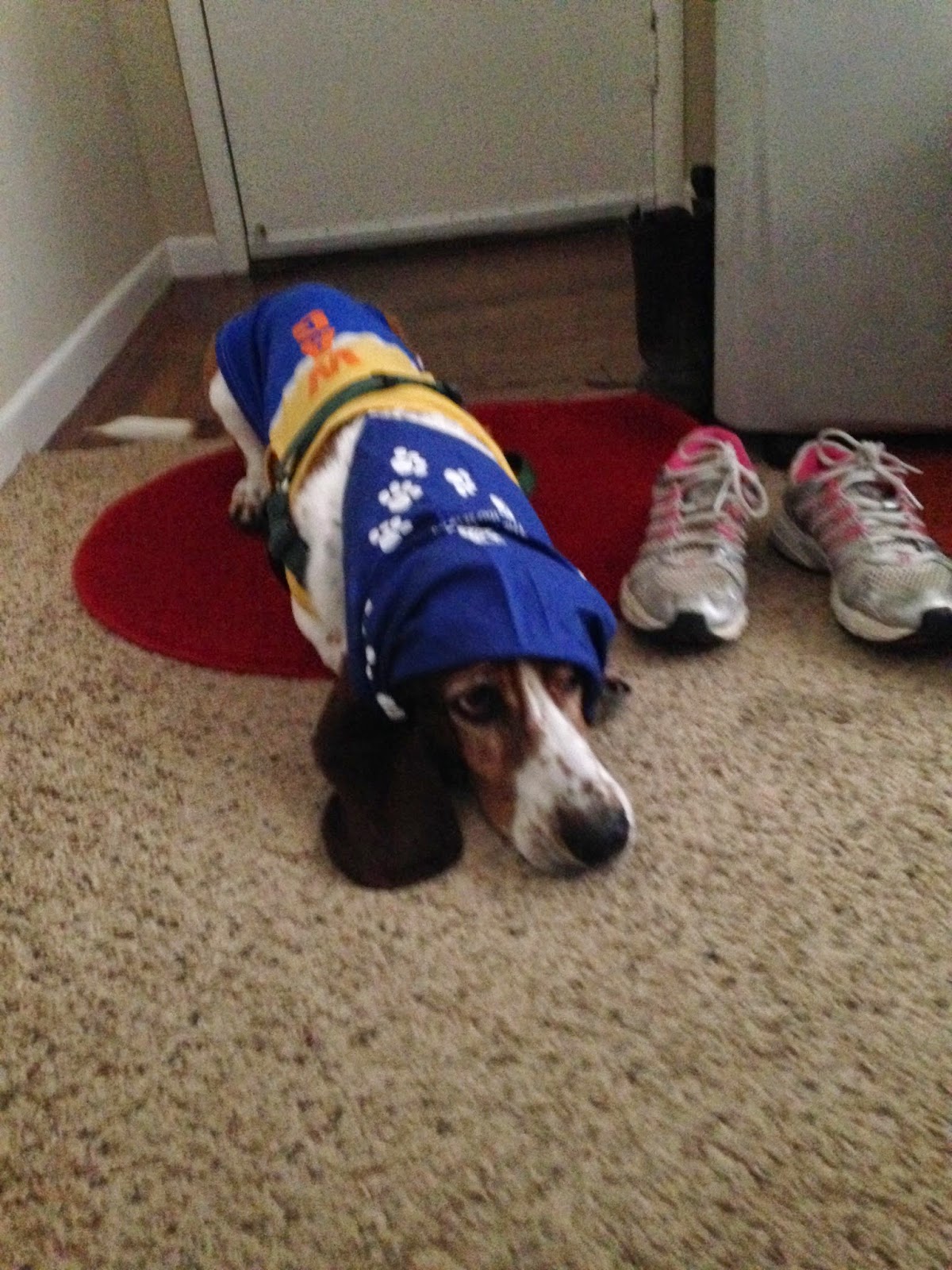 My person says I look like Mr. Frankenstein. I prefer to think of myself as Harry Potter the hero instead, with the crack on his head.

Well, I am going to rest up more-- good nite, Worm

A BIG HELLLLOOOOOO to Everyone!!! 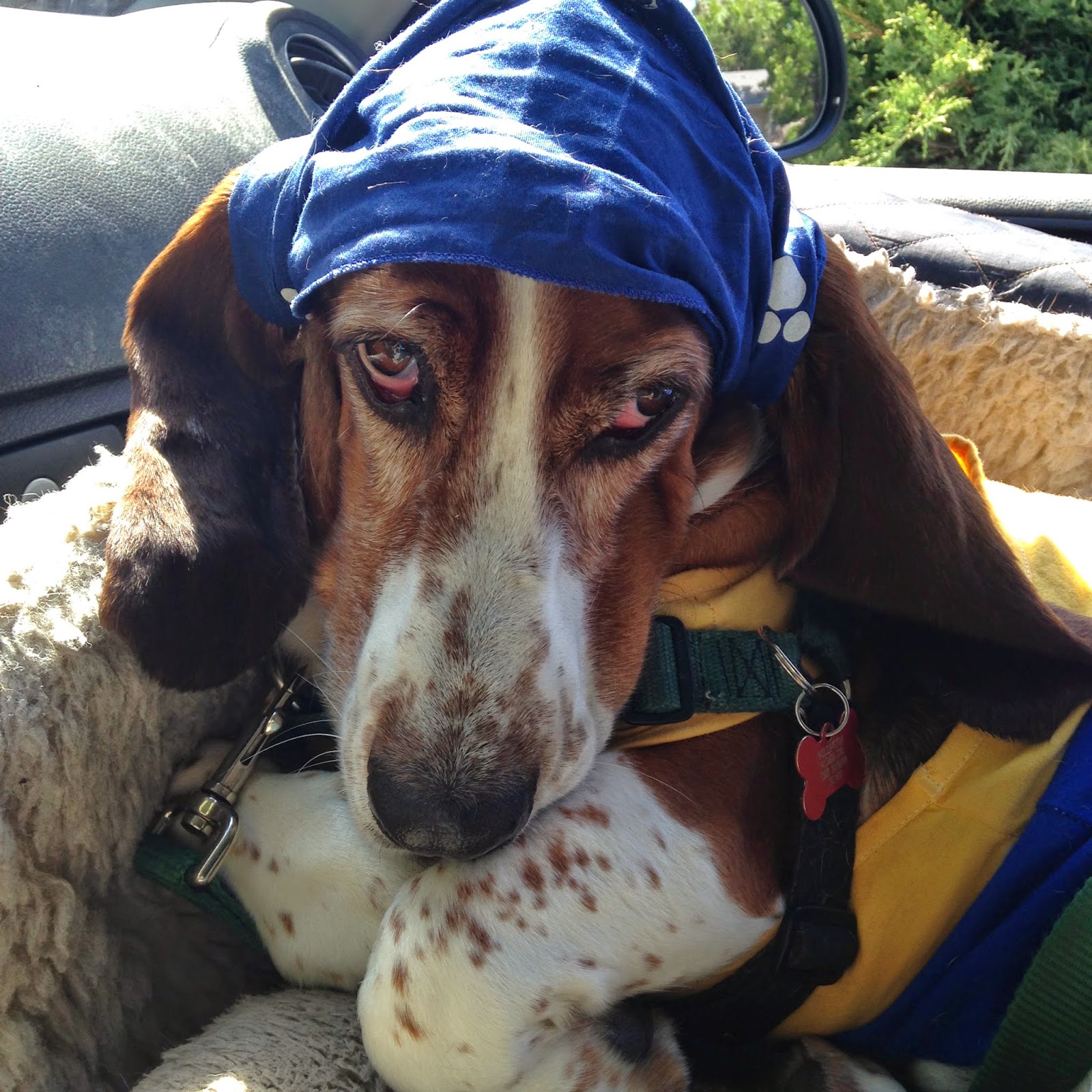 Sorry it has been sooooooo long. I hope to be writing more often now. Well, guess what??

I got THREE NEW SISTERS last week! My person says I needs to be awful nice to them, cuz they are very small and tiny. We got them exackly a week ago, and since then, our life has turned upside-down a bit! 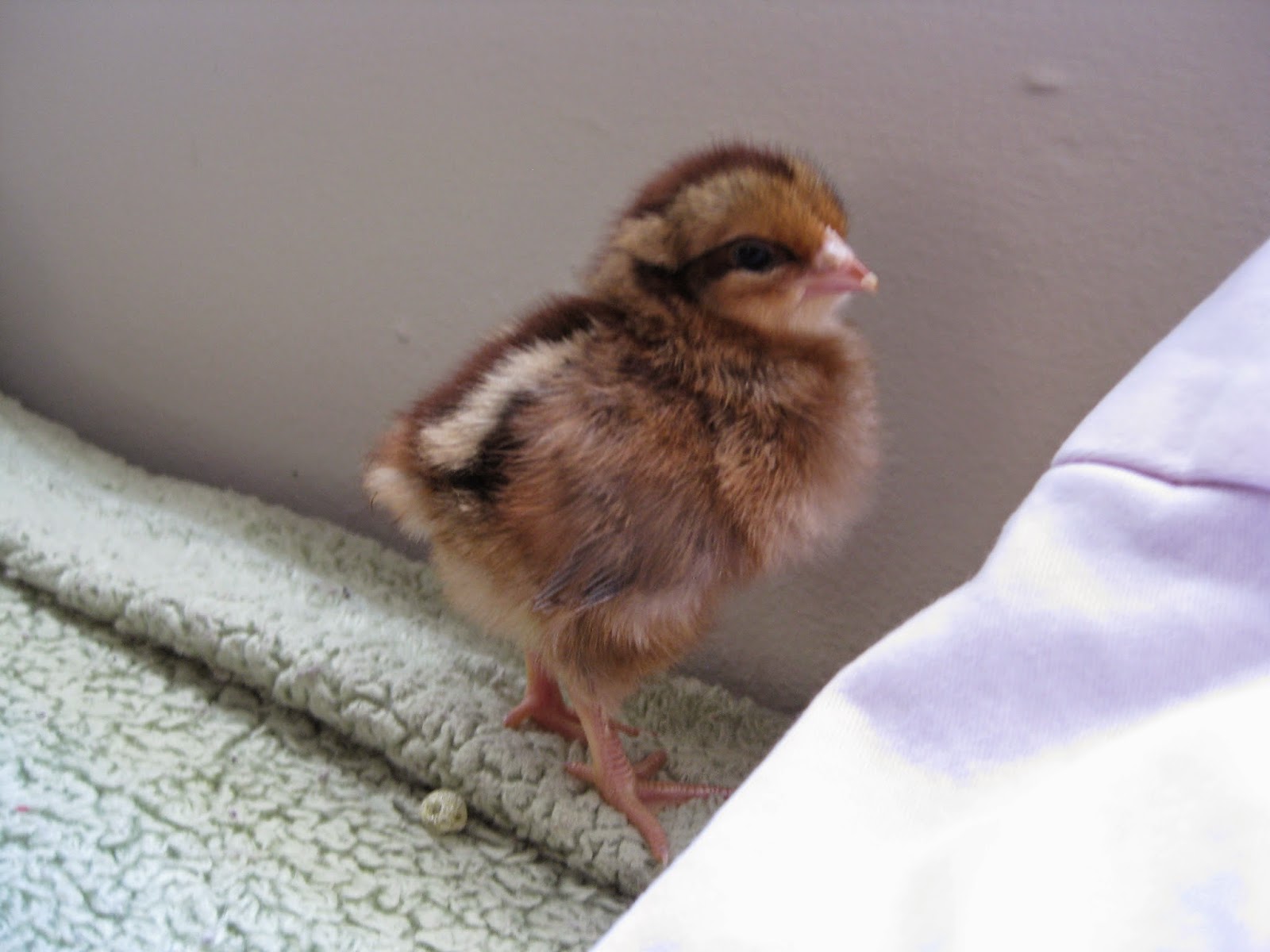 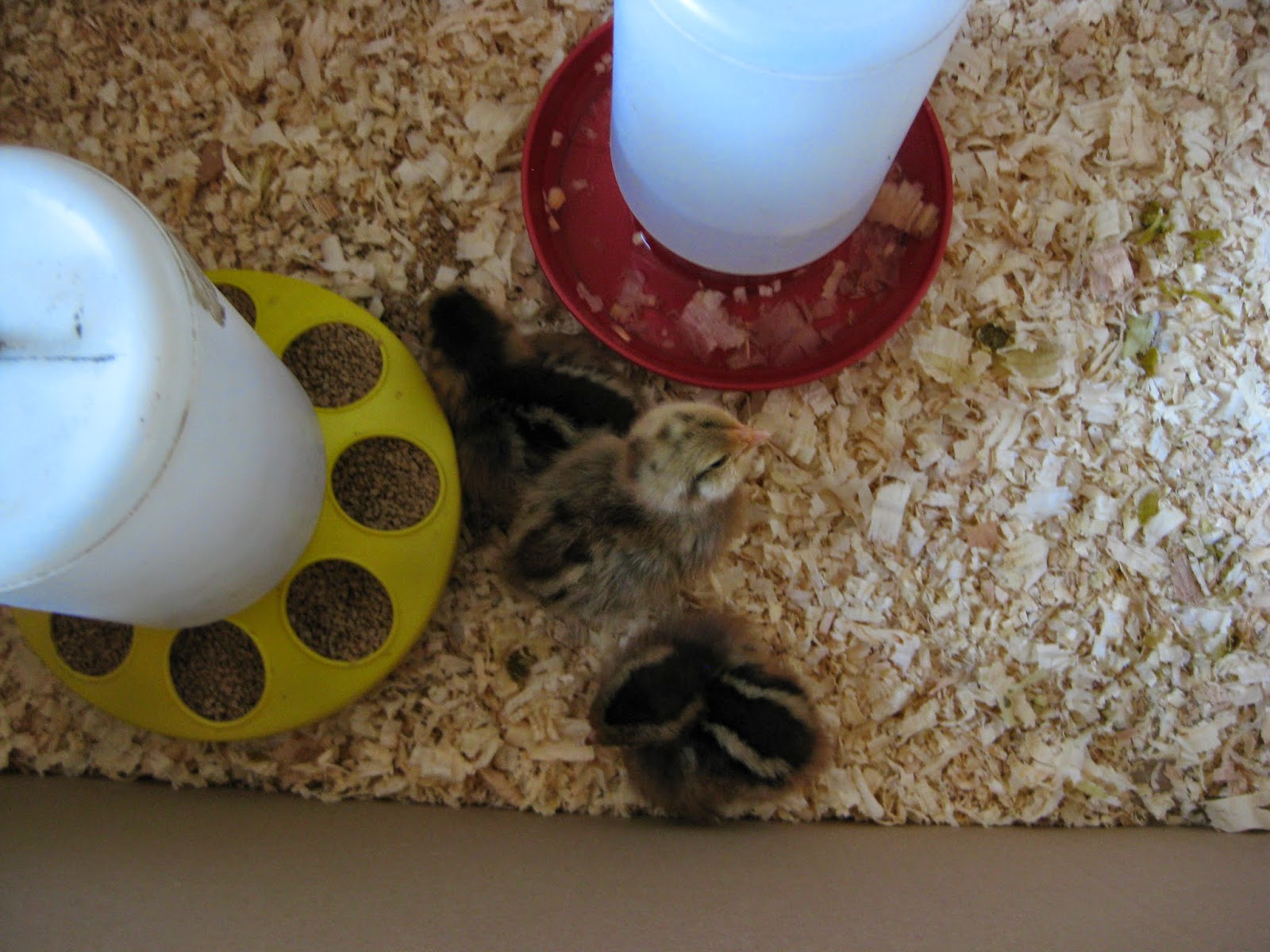 I didn't know what wuz going on, we seemed to be getting new supplies in the house. Then last Monday, apparently the chickadees HATCHED out of their shells in Ohio, and immediately got sent on a plane to us out here in Caleefoorneea (how do you spell that?). They can live on their egg yolk (mmm.... egg yolks, they are yummers!!!) for 48-72 hrs before they croak. So fortunately, they made it to us in 24 hours.

Last Tuesday, my person said: "Get in the car, Worm, we are going to the Post Office." The people at the Post Office were awfully nice and excited too! The woman brought the small box, and you could hear "chirp, chirp, chirp!" That was a relief, because that means that they probably made it okay. The person opened the box, and yup! there were 3 baby chicks in their, and they were moving around. A very good sign! They were shipped with a nice heat pack to keep them warm. Did you know that baby chicks have to be kept at 95 degrees during the first week of their life? I just learned that.

When we got home, the person opened the box and out popped 3 chickadees. Those are my new sisters! We had to move them to our Hello Kitty box, where they would live a few days (before they spilled their water and soaked the box up... those chickees are awful messy sometimes if you ask me!). They had to be shown their food and water. Now that is a process that takes a few hours. Clearly, they don't have my hound dog nose, which would have quickly found the food and et ALL of it! No, instead they walk around and don't et or drink, aren't they silly? We had to show them, one by one, where the food was, and then where the water was. We were worried about them for a coupla hours there.

Then they settled in, and actually quite liked their new home. They gotta sit under a red heatlamp 24 hrs a day at 95 degrees, which makes me feel hawt! Especially in the midst of the heat wave we been having. (One of my Auntie M agrees with me about THAT!).

Well, then the silly chickies, kicking their pine shavings all over their place-- yes, did you know that baby chicks like to kick things?? And they spill their water, and then kick their pine shavings in the water too. So we moved them out of their cardboard box, into their Chick Condo. We will post a picture of that soon.

My person says I gotta be very gentle with them. She also said "please don't et them Worm." Me says "okay." They confooouse me a little, cuz sometimes they are kinda skittish and unperdictable. But my person says I should get to know them. So I let them climb on me sometimes, ya see?

All right, well I will send more updates soon.

Hope everyone is doing well. Signing off, Worm

Posted by Worm, the Basset Hound at 11:16 PM No comments: