Hello Friends~ I have special news to share about one of our new pals, named Beau, short for Beauregard. Actually, methinks it is "Sir Beauregard." Here he is: 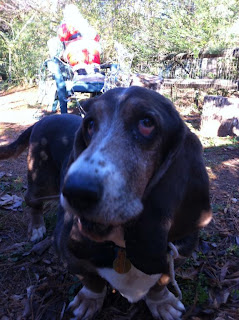 He is a distinguished, elderly hound who is ~12 years old!! Well, he has a sad story, because his owner passed away about a year ago. His owner was an elderly gentleman himself and loved Beau a lot. Life got sad for Beau after that because he went to live with his owner's relatives, but they were not "dog people" so he spent his time outside the house in a crate in a garage. He stayed there so long he peed in his crate, which is not good : ( We dogs try not to pee in our crates, and we tries hard! It is a bad thing when we decide to pee in our crate. It's sorta like wetting the bed. Not something anyone wants to do : ( But what're you gonna do if you really have to go and you have nowhere else to go???

So poor Beau, we felt very sorry for him. Fortunately these relatives reached out to our basset group and asked for help. And guess what?? My pal Rosco comes from a family of 3 basset hounds and a young couple who take care of them in Missouri. They offered to take Sir Beau into their home! And Sir Beau was living in North Carolina at the time...!! Crazy, huh?

So then they hads to find a way to transport Sir Beau across state lines, from the East Coast to the Mid-West, so they can come to Mr. and Mrs. Fury's home. And voila, they were able to! These nice drivers Nancy & Nancy drove Sir Beau to his new home in Missouri.

When he got there, they found he has huge tumors all over his body. They decided, as the vet recommended, to do surgery to remove them to make Sir Beau feel more comfortable. SO, he just had his surgery this past Friday and is recovering now. Here is his picture: 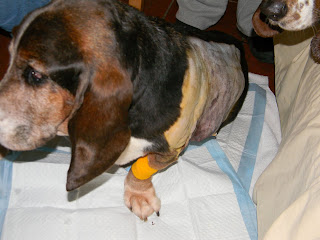 They shaved half his body for the surgery. They removed 10 POUNDS of benign tumors!! Can you believes that? I don't even personally weigh 40 lbs yet! Taking 10 pounds off is a lot for a basset hound!

Well, these wonderful Mr. & Mrs. Furies (I calls them that because they have a kewl blog called Jowls of Fury) paid for the surgery and also now have a 4th basset hound to take care of! What kind and generous people!

I has to also add that Mrs. Fury made me a "Basset Ear Band" to help me so my ears don't get so dirty when I eat and drink. We tried to pay her for it but she wouldn't let us!! She is so nice! Here is a pic of me wearing it (my person makes me wear it...): 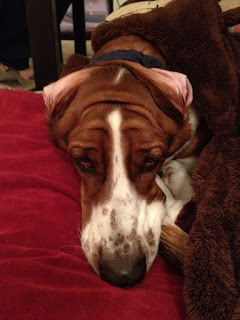 So check out the Jowls of Fury Blog that has more details on Sir Beau, his surgery, and his recovery here: http://jowlsoffury.blogspot.com/2012/02/do-you-know-what-this-means.html. At the top right of that page, you will see an icon for "Beau's Chip-In," and if you wish to donate $$ to help with his surgery expenses, feel free to do that there. I can attest that Mr. & Mrs. Fury are wonderful folks and they have done a wonderful thing by bringing him cross the country to help him!!

Great example of how life can be so beautiful sometimes, because of the good people in it!

Well, what happened was that everyone in my household got sick recently. The peeples caught colds and me got a U.T.I. I guess that stands for Urinary Tract Infection. Eck! I left a puddle in my Auntie M's bed, and I've been housebroken for over a year! That's how they knew and yep, me has a U.T.I. So I guess they don't blames me for the puddle. But my poor Auntie's bed. Thank goodness for washers & dryers.

These are my Valentine's Day pills that I've been eating for my U.T.I. Perfectly coordinated with the holiday: 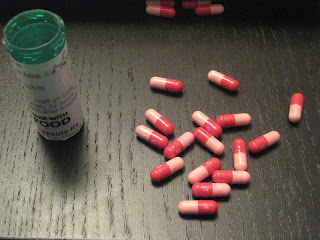 I am wishing a special somebody a HAPPY VALENTINE'S DAY this year, and that is my Valentine, Ms. Paisley, who lives in Ontario, Canada. Here's a picture of her, isn't she lovely? 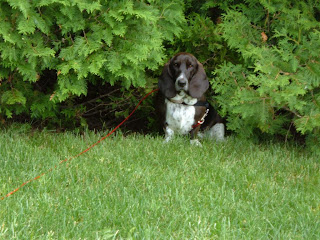 She's purty and funny and nice, and she is an unusual looking basset hound, mostly black & white. Hey, I like that!

Sending love and good wishes as Valentine's week comes to a close.
With love,
Worm
Posted by Worm, the Basset Hound at 12:38 AM 4 comments:

I wuz gettin' ready for Football and the SUPERFOODBOWL and I gots the "Muddies" recently:


They way I understands it is that there is a lot of running around. That's why I had to get my "game on" and get a lot of practice runs in to get in shape... in order to get to eat the most food at the SuperFoodBowl. This year, we descend on a place called "Indianasville" where several of my basset friends live, including: Simone, Napoleon, and Lucy & Millie!

Somewhere in the mix there is this thing called a "football," I think it's like the one in my picture above, and I dunno... methinks you fish it out of the superfoodbowl and whoever gets it wins and gets to eat the most???!! But I think everyone gets to eat, even if it's not as much as the winner, and that's the most important thing of all.

My SuperFoodBowl was a strange mix today: it had purple Doritos in it, pomegranate seeds, and fettucine noodles (cuz my person was making spaghetti). It was a good game today from what I could see: Eli Manning and the NY Giants pulled the football out of the bowl and won it, and gets to eat the most foods. Tom Brady and the New England Patriots played really well also and also get to eats a lot of food.

My more exciting FoodBowl was 2 weekends ago, when we were seeing if the San Francisco 49ers would make it to SuperFoodBowl. It was too bad because they didn't :( But it was oh so close, with a game that went into Overtime!! I am very proud of my 49ers cuz they did have a good season overall. My FoodBowl for that game had shredded beef tacos, chips and homemade guacamole (that was delicious), egg rolls, asparagus... it was pretty yummy!

Well, I have more SuperBowl, well actually SuperBeau news to share later this week.... so stay tuned!!
Cheers,
Worm
Posted by Worm, the Basset Hound at 1:05 AM 3 comments:

Meloves this thing called "daycare".... it is the best invention since, well, since hamburger patties! It is a great invention because it lets my person work a long, long day while I gets to play, play, play!!

I go to a place called Rainbow Bridge Boarding:
http://rainbowbridgeboarding.com/

Here are some of my fun times there: 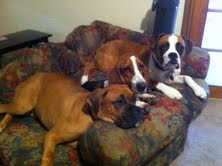 Basically, we dogs get to take over the house, inside & outside! Here are me and some pals sharing a seat together. Shea is the house dog. Melikes her cuz we have similar coloring : )

When my person goes away for "vacation," this is where I stay. My Auntie Deb and Kevin are the ones who run it, and it is lotsa fun spending the day with them. They likes us dogs a lot. They trained us not to bark and be noisy in the neighborhood. That is good, my person says.

Rainbow Bridge Boarding is a kewl place! I like playing with the other dogs there. Thank you Auntie Deb & Mr. Kevin for taking care of me when I comes over for daycare and boarding!! When I stay there overnight, guess what? I get to sleep on the bed with them. Don't I feel lucky?

Every time I goes home from daycare, I am out like a light bulb for the rest of the night and also the next morning. My person says "that's great!" There's the saying: a sleepy dog is a good dog. She keeps reminding me that. I say whatever, I just likes to sleeps. Anything that makes me sleepy is good, methinks.

In other news, it is my pal Henry's mums barfday! HAPPY BARFDAY, Ms. V!! Ms. V is British but she and Henry lives in Arkansas. They are kewl pals who have sent me lotsa yummy stuff. When Ms. V heard that the moffs ate all my dog treats and dog food, she sent me a boxful of new treeeats. When she saw me with the Skinnies, she sent more food to me to help fatten me up. She is very thoughtful and has a wicked sense of humor too!

Here is a pic of Henry: