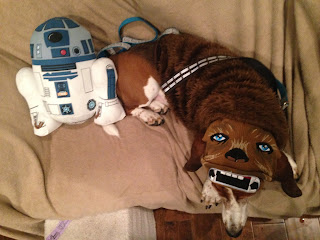 Hello Friends, it has been a long while and look, 2015 is almost disappearing and we haven't written all year long! Oh geez, well I'm gonna try to put a few entries in before it disappears entirely, as it has been an exciting year.


Auntie Gail used to have my pal Tara, but Tara has left us for the Rainbow Bridge (she passed away). But now Auntie Gail has a new puppy, a rescue named Happy, and he is very... happy!! He is full of bouncy energy. I guess I might be getting kinda old cuz I don't quite relate with bouncy energy all the time these days. I more like to sniff the perimeters of things and lay low. Here are some pics of my pals. Too bad I don't have a pic of Happy and Auntie Gail, but hope to include one in a future post.


Anyways, the peeples are partee animalz and went to 3 partees that day. They wuz Star Warz, so I became Star Warz too. They said I'm a "Chewbasset." I guess I'm supposed to be Chewbacca from Star Warz. Well I liked my costume this year cuz I looked scarrry and fierce and like I would chew someone's hand off! Even though of course I won't.

Well, we cannot wait for the new Star Warz movie to come out in December!!!

Cheers, Worm
Posted by Worm, the Basset Hound at 12:50 AM No comments: