Well, I realized I skipped right over Easter this year on my blog, and that's not to say that I didn't have an Easter. I did, see? 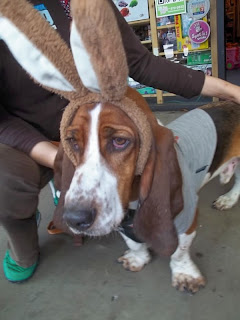 OH MY!! Yes, it's that dreaded once a year I hafta wear those bunny ears, that to be honest are yummier and more fun to eat, than to wear. I had to wear them for the "Bunnies & Bonnet" Parade, which I will explain more below.

We had guests over that weekend and they were all "dawg" peeples, so they loved on me a lot during the partee and I had a good time. The best part was that they all sneaked me foods like ham, and lots of other people foods... yummers! One of my Auntie M's made a big dish of brussel sprouts, which are my favorite, and I got plenty of those to eat. I ALSO tried TWO NEW VEGETABLES at the partee!

I tried these funny things called Artee-chokes, and the partygoers fed them to me and said I liked it! My person wasn't so convinced, but she was so bizzy eating her own Artee-choke & hosting, she didn't have time to monitor me all the time. My other Auntie M (for Melinda) made a beautiful platter of Artee-chokes, so everyone could have their own. She spent all afternoon steaming them in batches!

I also tried a new veggie called Aspari-gus. Delish! Melikes those. But they had a great debate at the time... friends, do you think it will make my pee stinky like it does for the peeples??? Please weigh in and let me knows what you think! I don't want to have all the dawgs laughing at me at the dawg park for stinking funky-smelling pee!!

Another really exciting thing I did recently was go "KYACKING." There was an R.E.I. paddling demonstration here, and they brought out 'kyacks,' 'canews,' and 'paddleboards,' for everyone to try out! Well, my person & Auntie Melinda put me in the 'kyack,' and paddled me around the lake there. It wuz fun and a little scarry! Sorry we have not pictures from it... next time. I had to wear my life jacket, and I couldn't understand why I wuz in the middle of what looks to me like a Giant Water Bowl... peeples are strange sometimes. But I understand we might be doing this 'kyacking' thing again pretty soon. I'll keep you posted.

Now, back to the "Bunnies & Bonnet" parade. Methinks it's an Easter parade or something here in Downtown Campbell, a city near where I live. The basset group goes and we have a 'mini-waddle,' and it is always so much fun to see so many bassets. We are s'ppose to dress for the occasion, and you'll see below how decked out many of the bassets were, it wuz impressive!!

Well, my person doesn't really have skillz like that, and plus I told her, if I have to wear those silly bunny earz, then I get to wear my San Francisco 49ers T-shirt, and she said 'ok fine.' So that's why I ended up wearing what I did. I shook my head at the beginning of the parade and my bunny earz fell off-- yes!! My pal Dracula started eating them, from what I heard. And we got them back at the end of the parade route.

Anyways, here are some pics from the parade. It wuz a fun time, and it seemed like the crowd got a kick out of us too.


I hope you all had a good holiday this year! More catching up next time.
--Worm
Posted by Worm, the Basset Hound at 5:26 PM 4 comments:

Well, I have to wish my pal Sasha a Happy Barfday!! She turned 1 year old, and she had a big partee over the weekend and it was lotsa fun!

OK, so who is Ms. Sasha? Good question... she belongs to my Auntie Gwen, who is a wunderful person who puts together all of our basset playgroups every month! I belongs to this group called "Bay Area Basset Hounds" and they have playdates on weekends several times a month. Auntie Gwen is also a wunderful photographer and took these pics of me running on the beach, which are in the background of this blog. She is very good at photographing bassets! We are lucky to have such a talented photographer in our group.

Auntie Gwen has 3 bassets and they all came to my 1st barfday partee last July, so of course I had to come to Sasha's. Here is a pic of them:


There were lots and lotsa basset hounds there, and that made it very fun!! I met a special hound named Snoopy who has the best aroooo we ever heard! He is so good at it, and did it 25 times, I think! Maybe he will teach me how to howl. Isn't Snoopy kewl?


It was a super-fun time with a lot of basset pals. Plus we got to eat all these yummy treeeats that Auntie Gwen baked and made for us, while we were there, and she also sent us home with some! I'm still working on mine now. She also made yummy baked goods for the peeples to eat too and they all enjoyed that as well.

Happy Barfday again, Sasha!! You're only allowed to misbehave once a year on your barfday and get away with it! Remember to be good the other days of the year or else ya gets in trubble. Take it from one who knows about trubble!
Your friend,
Worm
Posted by Worm, the Basset Hound at 12:53 AM 3 comments:

Where has I been?

Oh my gosh, cannot believe it has been more than a month since my last post on my sickie person!!

Well friends, that kept me busy for quite awhile, and then I had lots going on after that and haven't been back around to blogging. So much to catch up on. So I think I will do a blogging blitz and try to catch you up a bit... stay tuned... Worm
Posted by Worm, the Basset Hound at 11:55 PM No comments: