Wow, I received something really kewl in the mail recently...

This is the first package I ever received in my WHOLE life, so it was very exciting for me. Do I look excited? (Haha. Well, us bassets are ironic sometimes.) 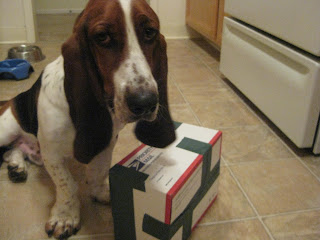 With all the 'duck tape' I couldn't open it very easily, so my person had to help me. At last, it opened & all the wonderful smells came out! 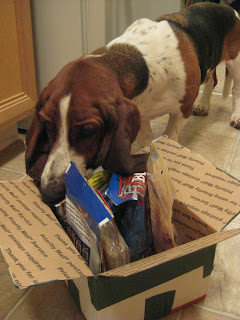 Wow! From where would I get such a heavenly package?

From a stork? From Santa Claus? (not quite yet, Worm, I'm told.) Well, it is actually from my basset pal Henry & his Mum, all the way from Arkansas!! It was a present from them! It was such a surprise & made my day, actually it made my whole week!

Here is a pic of my kewl friend Henry, and an action shot too. We have some things in common, like similar body types, and we're about the same age: 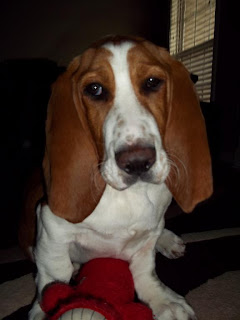 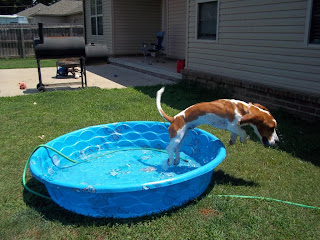 Thank you Henry & Henry's Mum!!! Meloves ALL of it!

His Mum is from the UK, so we sent Henry some marmite & Cadbury digestive biscuits. And although we were short on treats, we have lotsa toys, so we gave him some toys. We are now penpals! It's kewl & fun, I highly recommend getting a penpal : ) That's my thought of the day.

Fun times,
your Worm
Posted by Worm, the Basset Hound at 11:28 PM